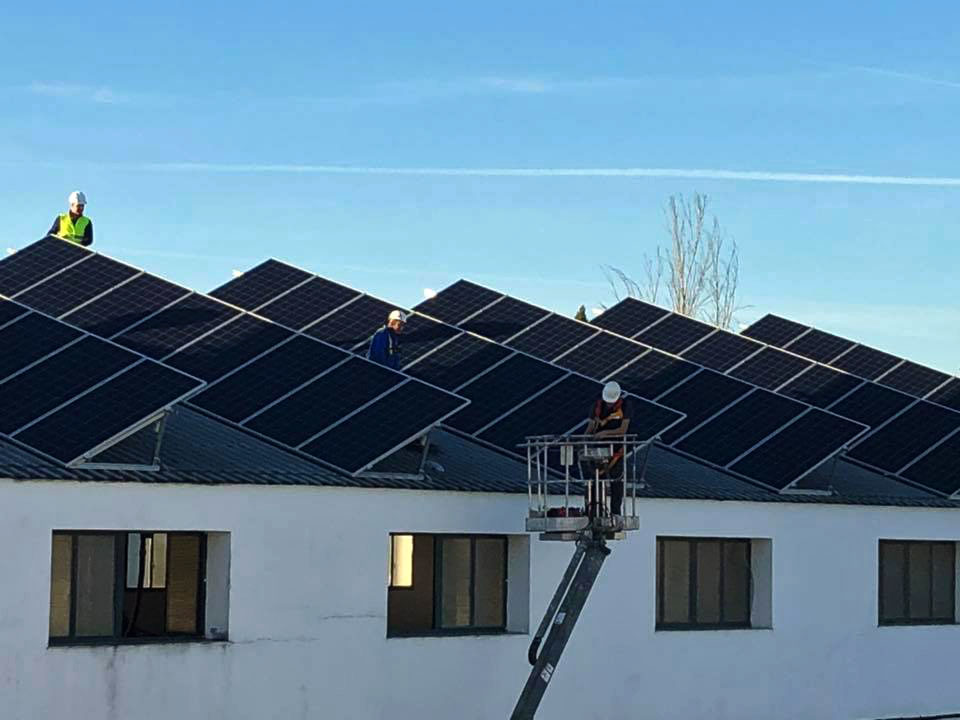 Bodegas Robles as a case study of photovoltaic solar energy

Article by Rosa María Laguna Ruz (Filosolar Association, Seville, Spain) and Nicolás Aranda Pérez (Greenartech S.L., Cordoba, Spain) included in the Encyclopedia of the UN Sustainable Development Goals, and relates how self-consumption facilities can help achieve these goals. The photovoltaic installation in an ecological production winery (Bodegas Robles) is presented as a case study to promote rural development in developing countries, as well as a project for installation in a medical centre in a developing country, and it is concluded that photovoltaic installations are one more tool to make use of and achieve sustainable development.

PV Self-Consumption Installation in a Wine Cellar
The first example chosen is related to a PV selfconsumption installation wine cellar located in Montilla, province of Córdoba, Southern Spain. This Andalusian region is recognized for its wines, and the peculiarity of this company is that they focus on organic production. By doing this, grapes are fed without using chemical components, following natural processes which contribute to improving the quality of the ground. For all this, the wine cellar is an example of sustainability within the viticulture world and can serve as an example of the use of PV self-consumption installations for developing countries.

According to the World Bank (The World Bank 2016), agriculture will be crucial and accounted for 1/3 of global domestic product (GDP) in 2014. The same source indicates 65% of working adults made a living through this economic activity. Therefore, it will be vital the decarbonization of this field as well as improving the living standards of this population.

Additionally, the wine cellar represents one of many farming activities that take part in many developing countries. A high percentage of this land usage is for farming activities, mainly vegetables, fruits, cereals, olives, and vines, among others. According to Research Institute of Organic Agriculture (Willer et al. 2020), from the 2.4 million organic producers, more than three quarters are in developing countries.

This winery cellar generates about 83% of its own energy thanks to a rooftop PV installation, working since December 2018 (Bodegas Robles Technical Team 2020). It consists of a 20 kW three-phase inverter and 64320Wp panels. These are tilted 30 degrees southward.

The building in Fig. 7 is where the tanks are located. Wine is stored in huge ceramic or metal tanks that can contain up to 5–10 k liters. This is necessary for the fermentation process, during which grape juice is naturally turned into wine. 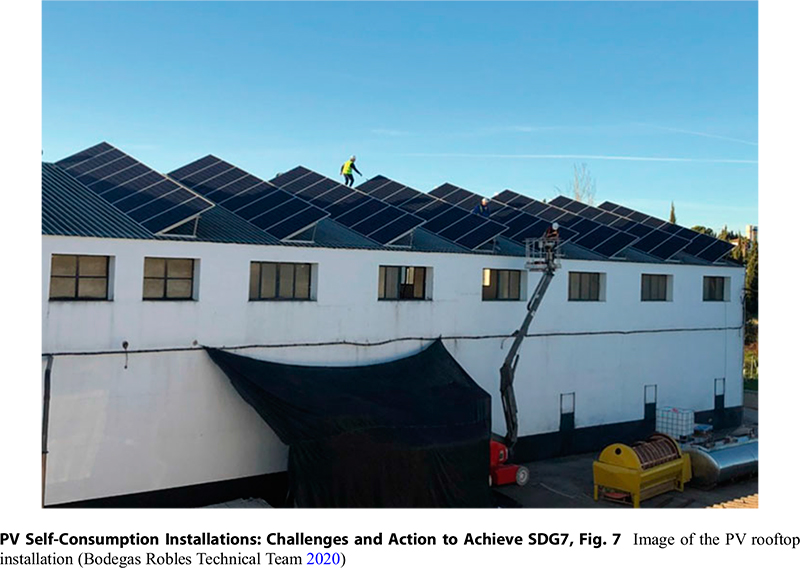 There is a singularity within wine cellar facilities, and it is that a relevant percentage of the annual energy consumption is concentrated between August and September due to the harvest season. It is during these months when grapes are collected and wine elaborated.

Thanks to the nature of PV installations and the facts that abundance of irradiation and scarcity of heat are powerful factors to increase generation, these 2 months are two of those with highest generation (Fig. 8). 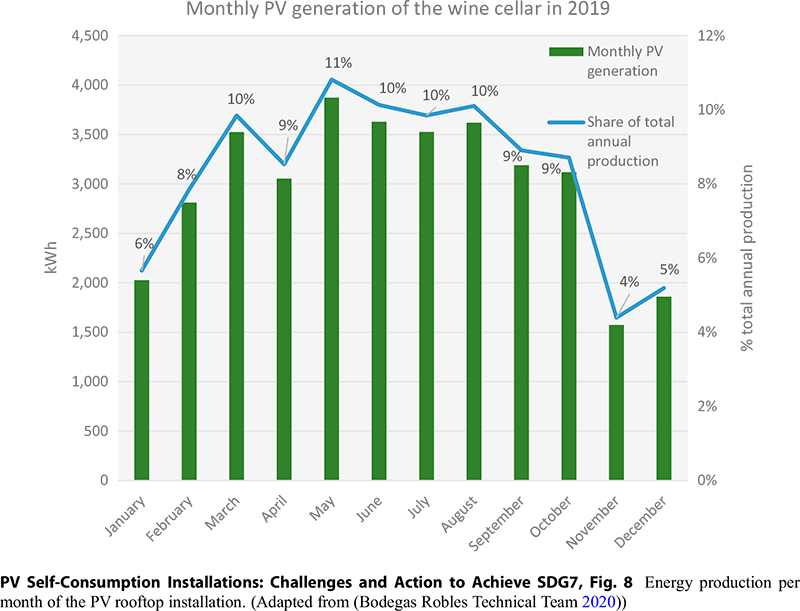 Grapes are usually collected at the end of the summer, as previously explained, although it depends on the variety of vines and the climatology of each year. When the trucks leave the fields after the collection, they arrive to the wine cellar to deliver their product. First of all the trucks are weighted and different properties of the grapes measured, and then several cleaning and filtering processes follow to obtain the juice. At these stages, heavy machinery is used, which requires certain quantity electricity to operate, and the upcoming wine transformation, involving further filtering and pumping of liquids through the different pipes and into and out of wine tanks.

When the harvest is finished, most of the machines mentioned above are stopped. Luminary and refrigeration of containers and tanks remain as primary consumption sources within the factory during the rest of the year.

Apart from that, the wine cellar also offers cultural visits in order to show the winemaking world to those interested, as well as wine testings. That is something to be taken into account, which sums up to the total use of electricity all along the year.

Outside harvest season the nonused electricity is fed into the grid, which plays its part of contributing of enhancing the percentage of renewables within the energy mix.

According to their carbon footprint study, this wine cellar is saving 14 tons CO2 annually thanks to this installation (Bodegas Robles Technical Team 2020). This could be the first step of the transition to renewable resources within this agricultural sector. It was the first wine cellar in the region to install a PV rooftop system; nowadays further companies of this sector are duplicating this idea.

Figure 9 shows a detail of generation and consumption from December 2019 to April 2020. Total self-generation is split into two different shades of green: dark green for self-consumption and light green for the exported energy. It can be seen that more than 50% monthly is self-consumed. 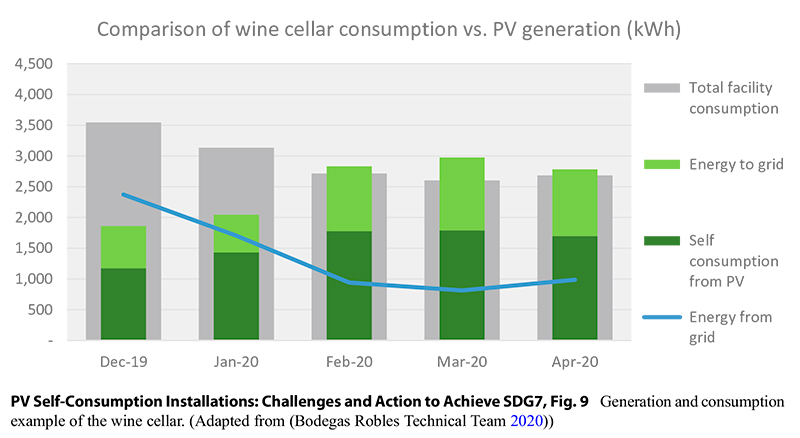 It can be as well appreciated that the generation is higher in spring than in winter months due to the usual decrease of solar resource during that period of the year. The peculiarity of this graphic is that the total consumption, showed in grey, decreases during March and April. This is someway related to the lack of activity due to the COVID-19, which provoked the suspension of wine tastings and visits as well as it limited the activity on site. However, the process of wine production and storage did not stop.

Finally, from the graphic it is interesting to analyze that not all the monthly PV generation is used for consumption, part of it goes to the grid.

This happens as a photovoltaic cell only generates electricity during daylight hours. In February and March, it happened many days that during the day, the PV system generated more than to cover the instantaneous consumption; however, electricity was also needed at hours without self-generation, or while self-generation was lower than consumption.

Monetary considerations and costs will not be included within the scope of the article, just a brief mention that the implementation of self-generation implies a reduction of electricity prices for any domestic or industrial customer, as can be understandable from the numbers showed above.

As a final thought, the payback time of a medium installation like this one showed here could be scarcely 5 years.